The end of this week, Friday 8th May marks a very important date in the year. On this day we remember and celebrate the end of World War II. It is called VE day or Victory in Europe Day. This year marks the 75th anniversary of VE day and England it is a bank holiday, so there is no school work set for that day.

Lots of celebrations in London and around the country have been postponed due to the current lock down, however it is still important to mark this important day.  Some families may be thinking what they can do to celebrate in their own homes.

We would like to thank the history team for and Mrs Kinnell who is a History Advisory Teacher for Hampshire for the resources that we are providing today. They are designed to dip in and out of and use what is appropriate for your child/ children. Complete as a family or set your child/children off to learn.

Do as many or as few as you would like to do! There are general activities and more detailed ones.

The activities and PowerPoints cover the whole Primary Range, so there should be something for everyone. If you would like to send in any of your work or photos please send it to school@stmarksce.org.uk and Mrs Tickle will be delighted to see what you have done. 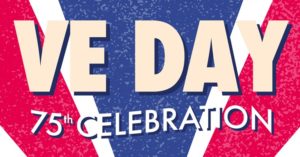 At the end of this week, the whole country (and many others across Europe) will be celebrating the 75th anniversary of the end of the Second World War in Europe. VE Day was a day of parties, cheering and happiness as people came together to hear the Prime Minister, along with the Royal Family, address them and celebrate the end of fighting in Great Britain. Soldiers would be coming home, families would be reunited, life would continue and slowly get back to normal. 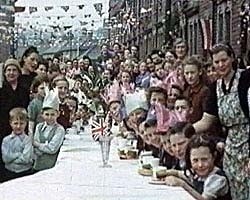 Activity One  – about WWII

Please watch this video clip which will give you an introduction and a basic understanding of World War Two along with the knowledge of who was involved. By the end of the video, you will know how widespread the war was and who the major players were. https://www.youtube.com/watch?v=HUqy-OQvVtI

Now go through the powerpoint of images (WW2 devastation images) showing some poignant images from the Second World War. Print off the one which you feel is more striking and annotate with adjectives or draw one if you do not have access to a printer. Use one colour to describe what you can see and a second colour to give an emotive response of your personal reaction to the picture. How would you feel if you were standing there in the picture? What emotions or feelings are inside that picture?

Activity Two – How were people affected?

It’s time to now get a deeper understanding of what the end of the war meant to people. Please watch this BBC video clip: https://www.bbc.co.uk/teach/class-clips-video/history-ks2-ve-day/z7xtmfr

Now share the powerpoint (What was VE Day) to give you a better grasp of what VE day was and how it was marked in 1945.

At the time, Winston Churchill was our Prime Minister; he delivered a speech to the nation marking the end of the Second World War. Read the speech aloud pretending you are Winston Churchill; how do you think he would have felt when saying these words?

To learn more about VE day and ensure you have an understanding, read this non-chronological report (VE report) about it and then answer the questions below.

How did people celebrate VE day?

What did General Jodl do?

Name two ways in which people would have lost loved ones.

Why do you think the author used an exclamation mark when commenting on the princesses walking amongst the crowds in London?

Why were two searchlights creating a letter V in the sky?

Was this the end of the war? Explain why you think this.

Now it’s time to think like you are a child during the Second World War. Many children had to be evacuated to a different part of the country, often alone but occasionally with a brother or sister. Evacuation means leaving your home and family behind to spend a number of years with different people, cultures and traditions in a safer environment away from the danger of bombing in home towns and cities. Go through the powerpoint (What was evacuation) to give you more information on evacuation and what it meant.

Now look at this powerpoint (Evacuee pictures) showing you real images of children embarking on this evacuation journey and during. Look at their faces – how might they be feeling? How might their parents who are sending them to a safer place be feeling?

Imagine you are being evacuated to another part of the country; the only way you would be able to communicate with your family is through handwritten letters and you have no idea when you will see them again. It could be a few months, it could be a few years.

Have a go at putting together your own evacuee suitcase. Go find 8 items you’d like to take with you – don’t worry about clothes, we’re focussing on luxury items which would help you remember family and home comforts. Don’t forget, there wouldn’t be any handheld gaming devices, tablets or mobile phones!  Maybe you’d choose your favourite cuddly toy, a book, cosy slippers or a photograph of your family. Get a picture of you with your suitcase contents and put it on the blog/website. As an extra challenge, can you write a short explanation telling us why you have chosen those particular items?

We’re going to continue the theme of evacuation and you’re going to develop your creative side. You’re going to read the beginning of the story Bramble and the Wrong Suitcase. Read it either on your own or with an adult. Make sure you look at the images as well as the words. What would the children be thinking and feeling at each point of the story? Your challenge will be revealed at the end of the story powerpoint. Good luck and we look forward to reading your work!

It’s time to celebrate the end of the Second World War!

Spend your morning being creative designing Union Jack bunting, Spitfires and preparing for your 1945-style street party for VE Day! (Obviously, with the lockdown, we’d suggest a picnic party in your own garden or home rather than a mass street gathering.) Make your own Spitfire glider – how far will yours fly? Maybe you could have a competition within your family – whose can fly the furthest?

How creative can you get? What decorations could you make using the colour theme of red, white and blue as those are the colours of the Union Jack flag?

Please take photos of your picnic parties and Union Jacks – we’d love to see how you celebrated the end of the war in Europe! Send them in for us to see!